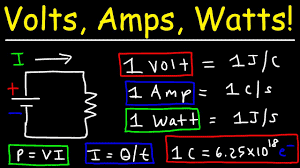 When choosing a pump, it is necessary to know the types of electrical currents for pumps. That will allow you to find the right pump for your project.

What is an Amp?

Ampere or amp (symbol: A) is the unit of electrical current. The Ampere unit is named after Andre-Marie Ampere, from France. One Ampere is defined as the current that flows with electric charge of one Coulomb per second. 1 A = 1 C/s.
Amps are also the minimum amperage required to operate a solar hot water pump.

Watt is the unit of power (symbol: W). The watt unit is named after James Watt, who invented the steam engine. One watt is defined as the energy consumption rate of one joule per second. 1W = 1J / 1s. One watt is also defined as the current flow of one ampere with voltage of one volt.
It is also the minimum amount of watts required to run a solar hot water pump.

The difference between Volts and watts

What is the difference between Volts and watts?

The difference between watts and Amps

What is the difference between watts and Amps?

There is a big difference between the two though as watts is a comprehensive measurement of power while amps is just the quantity of current being drawn. The amount of power can still vary depending on the voltage. The current in amps and the voltage of the source multiplied is equal to the power draw in watts.

What is PV and PV minimum?

What does PV mean?

What is PV min?

It is the minimum amount of watts required to operate the pump when running directly from a PV panel.

Also, please remember most PV panels are not putting out their rated wattage until full sun. If you would like the pump to start running earlier in the day than full sun, it would be good to utilize a larger Wattage PV Panel. While higher rated voltage than specified can affect the pump a higher wattage will not. The pump will only draw the wattage it requires.

If you have any questions or doubts about the types of electrical currents for pumps, feel free to contact us. We’d be happy to help you!

Furthermore, read our article about RV water pumps for Oasis systems and about our heat pumps for electric vehicles.